About Our Historic Akron Church 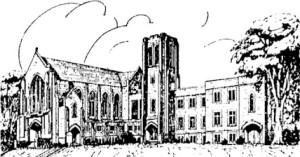 In 1836, a German settler named John Heins began to hold Akron church services in people’s homes for the Reformed and Lutheran Christians living in Akron. In 1840 this small Akron church erected a stone building on North High Street.

This worshiping group separated into two; those who continued using the German language, and those who preferred the Reformed English services. In 1853, the Reformed congregants organized themselves as a separate congregation known as Grace Reformed Church.

Akron’s population grew significantly during the latter half of the 19th century. In 1889, a group of North Hill residents met in Henry Zink’s sitting room to plan a Sunday School. This eventually led to the formation a new Akron church at the corner of Howard and York Streets, incorporated on October 27, 1890 as Trinity Reformed Church.

As the population of North Hill grew, this once small Akron church continued to grow. In 1929, Trinity built its current site at 915 North Main Street. In 1934, after the Evangelical and Reformed denominations merged, Trinity was renamed “Trinity Evangelical and Reformed Church.” In 1940 Trinity merged with the Wooster Avenue Reformed Church and met as one congregation at the Trinity Main Street location.

In February of 1958 Trinity joined the “United Church of Christ” which resulted from the merger of the Congregational Christian Church and the Evangelical and Reformed Church in 1957.

We continue to worship in the English Gothic style sanctuary, patterned in the form of a cross with two trancepts and adorned with beautiful stained glass windows. The Berghaus organ and grand piano in the sanctuary enhance our worship experience. Our organ is unique in that it has dual consoles and two ranks of pipes, one at the altar and another in the choir loft at the rear of the sanctuary.